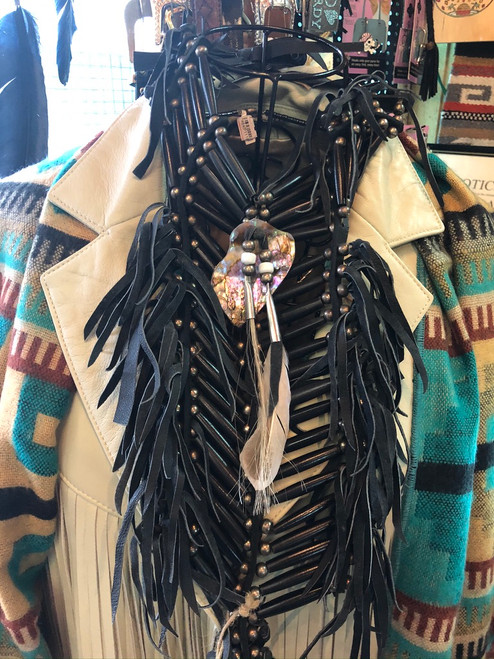 This one can be used as a lovely clothing accessory.

Worn by Plains warriors for hundreds of years, breastplates are made from a variety of materials including bone hair-pipe, deer hide and glass beads. Originally used as protection against arrows and spears in battle, breastplates continued to by worn by Native Americans in battle even after bullets were introduced and they no longer provided physical protection against the enemy.

They also provided spiritual protection to the men who wore them, giving a sense of strength and security to them as they fought for their tribes.

The decorations on each particular breastplate are deeply meaningful to its owner and often include feathers, quills, handmade beads and mirrors. The hair-pipe bones that make up the majority of the breastplate were traditionally made from the bones of a buffalo, difficult to obtain and thus symbols of capability. Oftentimes, the wealth and strength of a warrior could be determined by the number of hair-pipe bones that made up his breastplate, as well as the particular items it was adorned with.

This item may cost less postage than stipulated in which case I shall credit your web account with the difference.